The FIFA 20 Global Series is a face-to-face tournament between the best FIFA players from around the world. This weekend, 24 of the best teams met in Milan for a full weekend of top-level FIFA, and one name finished above the others: Complexity Gaming.

The North American team, made up of Joksan "Joksan" Redon and Max "MaXe_VIP" Popov, was the strongest throughout the weekend and, in fact, they were only the third team to win the competition, after two-time winners Brondby and KING eSports.

During the event in Milan, Complexity Gaming advanced to the Final 8 by finishing first in Group D with 26 points. The toughest match for them, however, was during the quarter-finals when NEO forced them to a third match.

After that, Joksan and MaXe_VIP disposed of Roma AS in the semi-finals, before meeting Ellevens, the new team backed by Welsh player Gareth Bale, in the final. Complexity took the lead by winning the first match, a 1v1 that Joksan won 2-0. Then, Ellevens levelled things up by winning the doubles match, before the Americans won it 2-1 in the last individual game, with MaXe holding his nerve to win it on penalties. 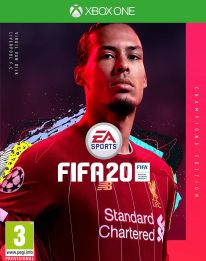